AJTX
Texas
Submission. Can the practical aspects of submitting to my husband teach me deeper truths about submitting to God? I'm exploring that in constant thinking and sporadic posting. Care to come along? I'm a wife, mom and teacher. But more importantly I'm a daughter and seeker of God.

Thanks for stopping by!

Submission.
Can the practical aspects of submitting to my husband teach me deeper truths about submitting to God? I'm exploring that in constant thinking and sporadic posting. Care to come along?
I'm a wife, mom and teacher. But more importantly I'm a daughter and seeker of God.

This is a definitely a work in progress, as am I. I have no idea where it will end, other than the promise by God that if we seek we will find - so I am definitely seeking!

What more can we ask?

Please add your own comments and learnings!

From Moses to Hosea -the second 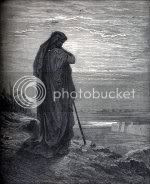 From Moses to Hosea :)

My fascination with Moses' desire to know the Real God led me into the same desire. I prayed over several years that I be able to know Him - to be someone He could rely on - to be prepared as a sanctuary for Him. I wanted to be a place of rest - a life lived for Him, not focusing on what He could do for me. There were many aspects, side roads and rabbit trails leading towards this, but I'll spare you. :) I heard the following quote from C.S. Lewis in 1995 - just one of the new threads added to my life's tapestry: (before I even knew I had a tapestry :) )

Imagine yourself as a living house. God comes in to rebuild that house. At first, perhaps, you can understand what He is doing. He is getting the drains right and stopping the leaks in the roof and so on: you knew that those jobs needed doing and so you are not surprised. But presently He starts knocking the house about in a way that hurts abominably and does not seem to make sense. What on earth is He up to? The explanation is that He is building quite a different house from the one you thought of — throwing out a new wing here, putting on an extra floor there, running up towers, making courtyards. You thought you were going to be made into a decent little cottage: but He is building a palace. He intends to come and live in it Himself (Mere Christianity)

So, I began a search for Him and praying for a "Flip this House" experience. What is He really like? What does He really like? How does He feel? What did Adam, Moses, David and others provide for Him, as far as relationship, that others didn't - others who were very moral good people? What did this verse mean from 2 Chronicles 16:9?:

God is always on the alert, constantly on the lookout for people who are
totally committed to him. (The Message)

For the eyes of the LORD move to and fro throughout the earth that He may
strongly support those whose heart is completely His. (New
American Standard)

Was that the key to God's friends? Their hearts are completely His? Must God search to and fro to find them?

These baby steps towards understanding God reminded me of His covering Moses as His Glory passed by. We are such weak humans and can only take small doses of God's reality. He must shield us or take things slowly for us to comprehend them. And just like the parables shared through Jesus - it's stories and life experiences that teach us best. My life experiences were leading me towards a very new understanding - and were an answer to what I had been seeking.

I then became interested in Hosea's story. What an amazing experience! It has totally changed my view of God. Labeled a minor prophet - the message and how it came about is certainly not minor! Many scholars, wiser than me, have written great summaries and applications from this book - so I certainly won't attempt to do that here. My slant is a bit different. 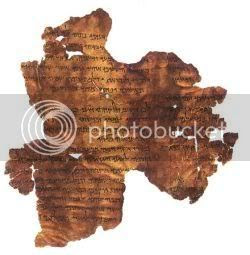 (a piece of Hosea from the Dead Sea Scrolls)

God came to Hosea and said "I want you to get married." God had chosen the girl even - and it was one that pleased Hosea. A purty one! What follows is a heart breaking accounting of Hosea's love and Gomer's fickle adulterous lifestyle. She left the only one who loved her for a myriad of others who looked good fleetingly but only used her. Hosea still loved her - not because of who she was or what she did - but because of who he was - and his love for her. Her lowest lows did nothing to change him - other than him still working to take care of her, wanting to give her love - even in the background.

"It had to be tough on Hosea when people started to gossip about Gomer's promiscuity. But it had to be harder when he introduced someone to his family:"And I'd like you to meet my wife, Gomer. (Gomer, please cover up your cleavage.) And these are my three children: Castaway, Not Loved and Not My People." (from What Ticks God Off)

Why did God orchestrate this odd and miserable life for Hosea? Why did he choose such a fornicatin' woman for a man who was chosen as a mouthpiece for God Himself? Why did he put such negativity on those children for life by saddling them with such horrible, negative names? What sin had those kids committed to be treated this way? I see two important issues here.

When we have experiences with God - it is not to share the nuts and bolts of what we've been through. That's intimate between God and ourselves - something tailored made for our depth, understanding and place in our individual walks. We have no record of Hosea saying, "Let me tell you what the Lord and I have been up to. He spoke to me and told me to marry Gomer . . . " No, Hosea lived the life God had set for him and then had the emotions to plead the message with God's emotions - the abandonment God felt . . the jealousy He was living with . . with the love He so wanted to give. Hosea knew the reality and could share it with tears and a broken heart. Can you imagine the message he gave?

So, the various threads of my tapestry, that God began weaving before I even knew I was on a quest for learning about and experiencing submission, are beginning to exhibit a very definite pattern. It's all about submission. I am learning that submission to God is realizing there are works that He has prepared already for me to walk in. Those works are for His good pleasure - not mine. But, they are part of his plan and all I need to know/do/be has been provided through his creation of me. Also, I have learned that God is with me in all the experiences of my life and through them I learn more as I seek and knock. Those experiences are His and mine - not made to be shared. But the person I have become because of what he has provided and taught is a testimony to Him. Our Father needs people who are lights on a hill, the lower lights of the light house - the people who experienced the dark and the crashing waves on the rocks and can then point with confidence to God when others are white knuckling it through a shadow-of-death experience.